What does a turkey say?

My youngest is SO in love with the song ‘What Does a Fox Say?’  that he will literally drop whatever he’s doing and bust into a dance whenever that song is played. It makes for great entertainment and countless family videos…poor thing! If u haven’t heard it yet, lucky you because it’s one of those (presumably) one hit wonders that gets into your head and never leaves. No joke, I wake up singing it in my mind so I’m convinced that it marinates in my subconscious all night! How’s that for a sales pitch? 😛 If u still want to hear it (k. It’s really not that bad) here it is.

Turkey season is right around the corner, and so is the kickoff to the ‘holiday season’. Like most families, Thanksgiving to us means getting together with extended family, cooking together, laughing and eating. Is there really anything I’ve missed? Ok well…maybe we indulge in a glass (or two) of organic wine. It is one of only 3 times a year that we eat turkey so we enjoy it!

Did you know that the majority of the 46 million turkeys consumed each year come from factory farms?

What exactly is a Factory Farm?

If you’ve ever driven past or visited a factory dairy or meat farm you will know that the smell precedes the view. There’s one in particular in northern California that is permanently burned into the noses of our children. They remind us frequently of the smell that went for miles (not really miles but kids exaggerate that way).  There were A LOT of cattle confined to a SMALL area.

In case you haven’t guessed, factory farms AKA confinement farms were born out of the desire for …drumroll…increased profit! Big box stores are competing for your grocery dollars while securing high profit. Shopping at these box stores only increases the demand for the less expensive meat.

Turkeys born in these factory farms begin life in an incubator where they are hatched. A few days later they undergo the painful procedure of having their beaks and toes snipped off. The reason? To curb any harm from the aggression that arises in these birds due to their extremely tight living quarters. These factory or conventional turkeys are immediately put on a diet of (GMO) corn and antibiotics. Many don’t make it past a few weeks of life. A turkey that weighed 17 lbs in 1970 now weighs in at 28 lbs thanks to their medical diet and living conditions ….. If a human baby grew at the same rate it would weigh 1500 lbs at 18 weeks of life (source)! These turkeys are stressed, medicated, suffering and slaughtered inhumanely.Those stress hormones and additives are then passed through to the person consuming the bird. Not much to be thankful for.

Butterball, the ‘brand name’ turkey has come under fire in past years for inhumanely treating and slaughtering their turkeys. According to PETA “during an undercover investigation at a Butterball slaughterhouse in Ozark, Arkansas, PETA investigators documented that Butterball workers punched and stomped on live turkeys, slammed them against walls, and worse.”

I am in no way encouraging anyone to give up their thanksgiving turkey nor become vegetarian. I believe that animal products are very nourishing for the human body provided they are raised ethically. In the spirit of gratitude, before every meal as a family we give thanks to the earth who provided nourishment to our meal (whether it be the sunlight, rain etc…) as well as the animal who was raised with love and appreciation. In the same spirit of thanksgiving, we do not support factory farms and support these other options: 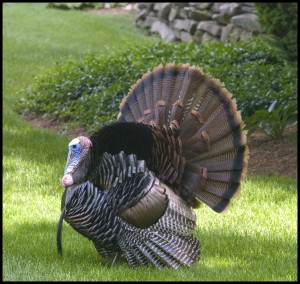 Free range has become a trendy term lately with many restaurants serving free range chickens, turkey and eggs. The phrase would suggest freedom, exercise and open spaces but what does the term really mean? Well, it basically depends where you live.

There is no limit imposed on flock size for free-range UK turkeys. Beak trimming is permitted. A free range bird must have ‘continuous daytime access to open-air runs’. This is not imposed, but rather offered. In actuality, few birds on large scale free range farms take advantage of this freedom. Most choose to stay indoors, many out of fear. There is also no requirement that there be grass or rocks for the birds to peck and nibble at outdoors. Feed is conventional.

Birds must have continuous access to open-air runs – again, not imposed but offered. Runs must be mainly covered with vegetation. the feed formula used in the fattening stage contains at least 70 % cereals.

The term is very ambiguous. Birds must be ‘allowed’ outdoor time but no minimum requirements are stipulated, nor is the size of the outdoor space. Outdoor vegetation is not mandated either.The feed is usually the same feed given to commercial large scale birds.

The term ‘free range’ is not regulated in Canada. Birds labeled as ‘free range’ don’t necessarily have access to the outdoors.

These are the lucky birds. Their health and well being is front and center. These birds are born naturally. They roam freely outdoors in uncrowded fields. Their food is certified organic and thereby free of pesticides, herbicides, hormones and antibiotics.  If you’ve never had an organic turkey you are in for a treat! They are succulent and juicy and have a superior taste. You are also get more nutritional bang for your buck as research shows that pastured meat and dairy are far more nutritious than their conventional counterparts. They are richer in antioxidants; including vitamins E, beta-carotene, and vitamin C and contain far more Omega-3 fatty acids. Turkeys that are pastured and allowed to roam around and practice normal turkey pecking and other normal behaviors are healthier, safer to eat, good for the environment, and get to live a happy life (source).

What Else Should I Know?

As far as our family is concerned, once you’ve tried an organic turkey, there’s no going back. We only eat turkey 2-3 times a year and happily pay the extra cost for a succulent, tender bird that has been humanely raised and respected by farmers who practice organic farming. However, there may be sticker shock for someone just new to buying an organic turkey as the cost can be 4-5+ times the cost of a conventional bird. In the early days of our transition to organics my hubby and I would rationalize things by how much money we would haphazardly spend on our daily addiction of overpriced designer coffee that did our body no good at all. That line of thinking is what made the idea of scrimping on something like an organic turkey that cost what we would spend in a week at the coffee pirates, absurd.  Happy Thanksgiving! 🙂