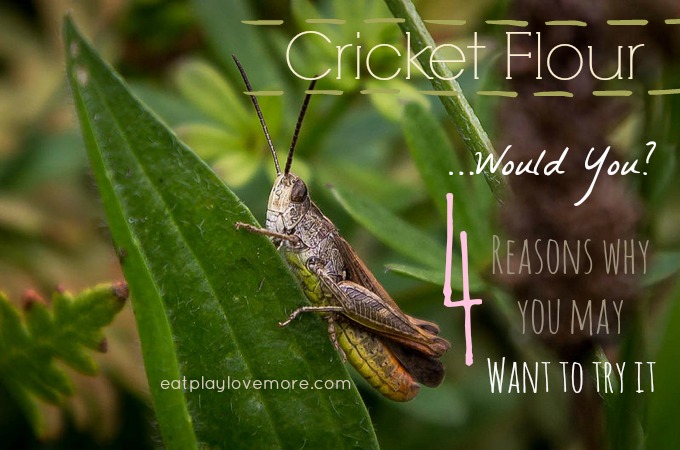 Pssst! Have you heard about the new gluten free flour/protein powder that is making its way through health circles? No? Well…..It’s made of……ready for this?

*Side bar: I *may* have had to put down my bowl of curry lentil soup as I researched this article 😀

True story. Cricket flour is, according to the United Nations (Food and Agriculture Organization):

How is it made?

Crickets are dried (or roasted) then ground up. The end.

OH! and the legs, wings, etc. are removed after the first course grinding, the rest is good to go.

I’ve never personally tried it but I have it on good authority from those who have, that it has a taste similar to buckwheat.

OK Libby, I’m still not convinced. Give me 4 good reasons why I should try this…

I love a food challenge. So here goes!

What is this flour used in?

Cricket flour is becoming so popular among North Americans that there are several companies chomping at the bit to get their products to market. Here are a few interesting and presumably tasty examples that I have come across:

Now, I like to think I’m open minded but this would definitely take some time to ponder. If you’re anxious to give this a go, check out these recipes (and please do check back in and let me know your thoughts):

Megan over at Eat Beautiful has 2 recipes:

« Watermelon Salad with Baby Kale and Maple Vinaigrette
6 Reasons to Toss the Teflon! »