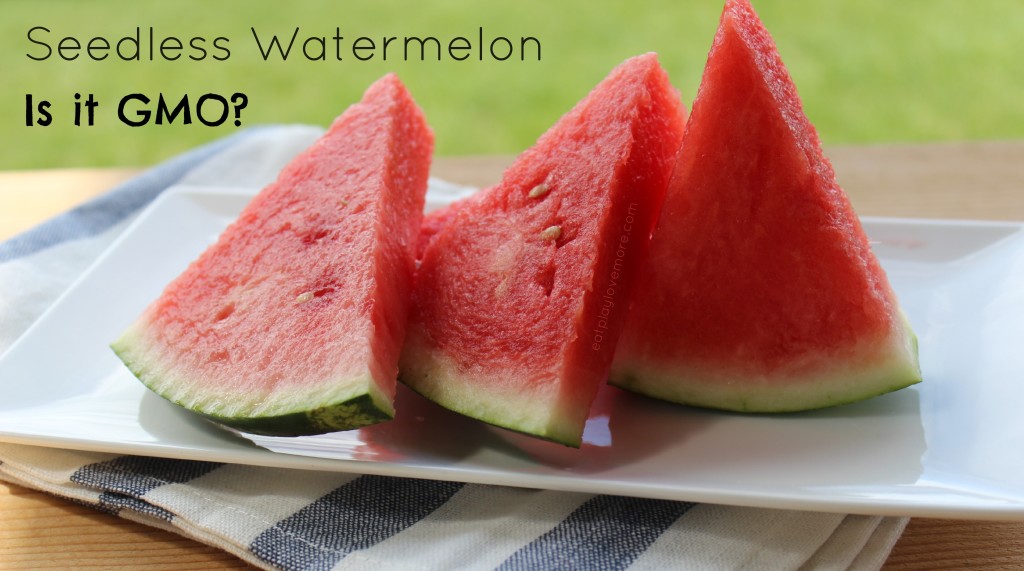 With the bounty of regularly shaped watermelon making frequent appearances at picnics and cookouts this time of year, my 6 year old with a look of confusion, asked me how seedless watermelons can even grow without a seed to plant. “What a great question” I thought! One that needed further exploring…

According to the National Watermelon Promotion Board, only 16 percent of watermelons sold in grocery stores have seeds – down from 42 percent in 2003.

I fondly remember backyard seed spitting contests, or screeching in horror as my grandfather would swallow the seeds from each chomp of his watermelon laughing about the watermelon that would grow in his stomach. Nowadays, our kids, don’t even identify with the iconic black dotted, pink watermelon slice! Rather a slice of watermelon to them looks the ones above!

Are There Any Benefits to Eating Seeded, Unadulterated Watermelon?

Watermelon is originally native to the East Indies and Africa and has long been used medicinally. In fact, the seeds were believed to be effective in the treatment of worms and urinary infections. Making a tea by simmering the seeds in water for 30 minutes was traditionally used as a natural remedy for kidney and bladder problems. The watermelon flesh is high in lycopene and has high levels of vitamins A and C and a good level of vitamin B6, but those seeds sure sound like they play a heck of a role!

So, Why Did the Watermelon Become Seedless?

As with most everything in our culture of convenience, the seeds in watermelon apparently were and are an inconvenience. Those pesky seeds cause us to have to pause to spit them out (read: sarcasm). With an increase in people on the go, seedless watermelon is in high demand partly because of the desire to consume watermelon in quick fruit salads that can be purchased and eaten on the run. All you have to do is head into a Whole Foods and check out their selection of cut and packaged fruit to understand, AND as we all know, demand influences supply.

How Did the First Seedless Watermelon Come About?

…And How is it done today?

Nowadays there are two options when growing a seedless watermelon:

So, Does That Make Seedless Watermelons GMO?

In the broadest sense of the words, there could be an argument that the humble watermelon was genetically altered, however, it is not officially considered GMO because no genetic material from any other species was introduced. If you’re a purest you will definitely want to stay away from the seedless watermelon.

If you’re concerned about your health, you may just want to think twice before eating that next juicy slice of seedless melon. Because they are not labeled, you will never know if colchicine was involved in the growing of your melon.

Where can I buy an Old Fashioned Seeded Watermelon?

Just an FYI, by far the largest world producers of the seedless watermelon are China, followed by Turkey, Iran, the USA and Egypt. If you’re looking for a classic melon, look no further than your local farmer’s market. A juicy organic seeded watermelon is not only nostalgic but nourishing as well!