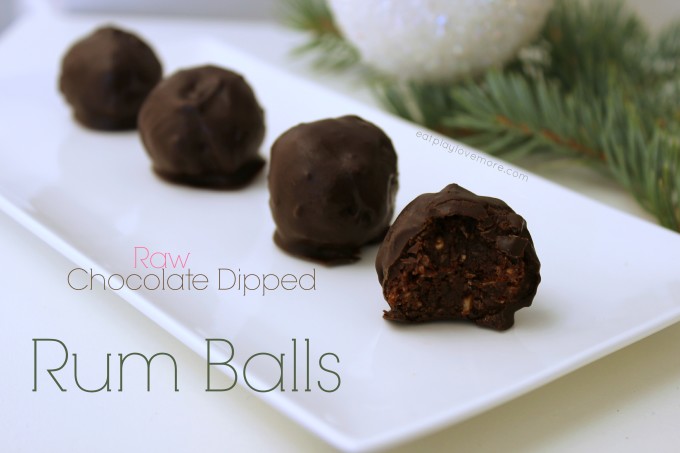 **Spoiler Alert** If you’re one of my girlfriends, stop reading NOW because you *may* be spoiling part of your Christmas gift!

In the last few years, I’ve focused on giving meaningful, useful gifts from the heart and if they’re nutritious and delicious at the same time, then it’s a double win! Yup, these delicious morsels of heaven will be included as part of my girlfriends’ Christmas gifts this year because nothing says love quite like chocolate dipped rum balls! 🙂

I really didn’t know much about rum other than it went really well with Coke. Yes, that was my beverage of choice once I became of age. Don’t judge me but I could put a couple of those back over the course of an evening ;-).  In reality though, rum really does have an interesting history! Rum first made its debut in the seventeenth century in China and India as a way to use molasses, the unwanted by-product of sugar cane production. Christopher Columbus is credited with bringing it to the New World where it was highly welcomed and quickly gained popularity.

Although the origin of the word ‘rum’ is murky, present day sales of this drink certainly are not! The latest numbers for rum sales in the US are more than $2 billion a year! In fact, every day literally tons of sugar cane are trucked into the Puerto Rican distillery of the largest producer of rum in the world: Bacardi. This particular distillery produces 100,000 gallons of rum a day!

Mass producers generally add yeast and water to start the fermentation process while other smaller producers allow wild yeasts to perform the fermentation, this is the preferred method. Large producers (like Bacardi’s) allow the liquid to ferment for a day before it is refined, heated and separated into giant barrels. Some producers allow it to age for a year. The aging process determines the color of the rum. Rum aged in oak barrels become dark, whereas rum aged in stainless steel tanks remain virtually colorless. It’s also worth noting that there are organic, fair trade, traditionally prepared rums out there too, so choose your favorite rum and get started!

A note of interest is that Bacardi recently revealed that it will source 40% of its sugarcane from sustainable sources by 2017, rising to 100% by 2022. I love it when our voices are heard!

*Just a note: Technically because rum is heated, it does not constitute ‘raw status’, so the title of this post may be misleading to a purist. I went ahead and called this “Raw” because the ball itself does not require any baking, plus the rum could always be left out to honor rawness. 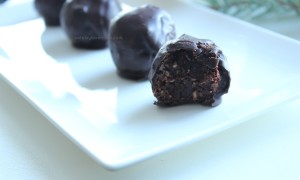